Brockley Festival of Ideas for Change

Many writers, thinkers and activists have chosen to make Brockley their home and we will be celebrating this civic strength with an inaugural one-day Festival of Ideas.

Based around a theme of ‘Think global, act local’, ideas we hope to discuss include: democracy (and lack of), education (what’s it designed for?), international law (lack of effective), ethics for a new age, money creation (by banks), arms trafficking, inequality, scrutiny of public finance, corruption… and many other ideas we hope people will contribute.

We expect a broad attendance and intend the event to be practical, speaking to everyone in our community. Morning and afternoon sessions will each consist of four selected speakers of 10 minutes each, followed by shorter selected from the floor and an open discussion.

Although admission is free, we strongly hope that attendees will donate what they can: we aim for the event to be self-funding.

DO YOU HAVE AN INTERESTING IDEA FOR CHANGE? If so, get in touch with the organisers and they will try to arrange an opportunity for you to promote it on the day.

More details on the Festival of Ideas for Change website.

Book your tickets now on our TicketSource event page:

On a related note: this will be another opportunity to see the famous murals in the Hall which are, as the Transpontine blog explains:

“… a set of striking pastoral murals dating from the 1930s.  At that time the school was called Brockley County and was a boys school (if you go into the Brockley Mess cafe today they have a large photo of boys eating at the school). They undertaken by a group of students from the Royal College of Arts – Evelyn Dunbar, Mildred Elsie Eldridge and Violet Martin – along with their tutor Charles Mahoney (aka Cyril Mahoney, 1903-1968). They started the work in 1933, with the finished results being officially opened in February 1936. Dunbar (1906-1960) went on to be the only official female war artist in the Second World War, noted for her paintings of Land Girls and nurses (including at St Thomas’ Hospital). 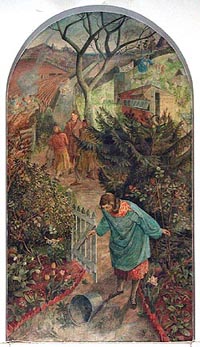 The five panels were loosely based on the fables of Aesop and other writers, in addition to s 39-foot panoramic view of the school and Hilly Fields. It was Dunbar who painted ‘The Country Girl and the Pail of Milk (above)’, with her sister Midge as the model. M.Elsie Eldridge painted ‘Birdcatcher and the Skylark’, and Mahoney ‘Joy and Sorrow’. They were painted directly on to the plaster in wax.”
+ Google Calendar+ iCal Export